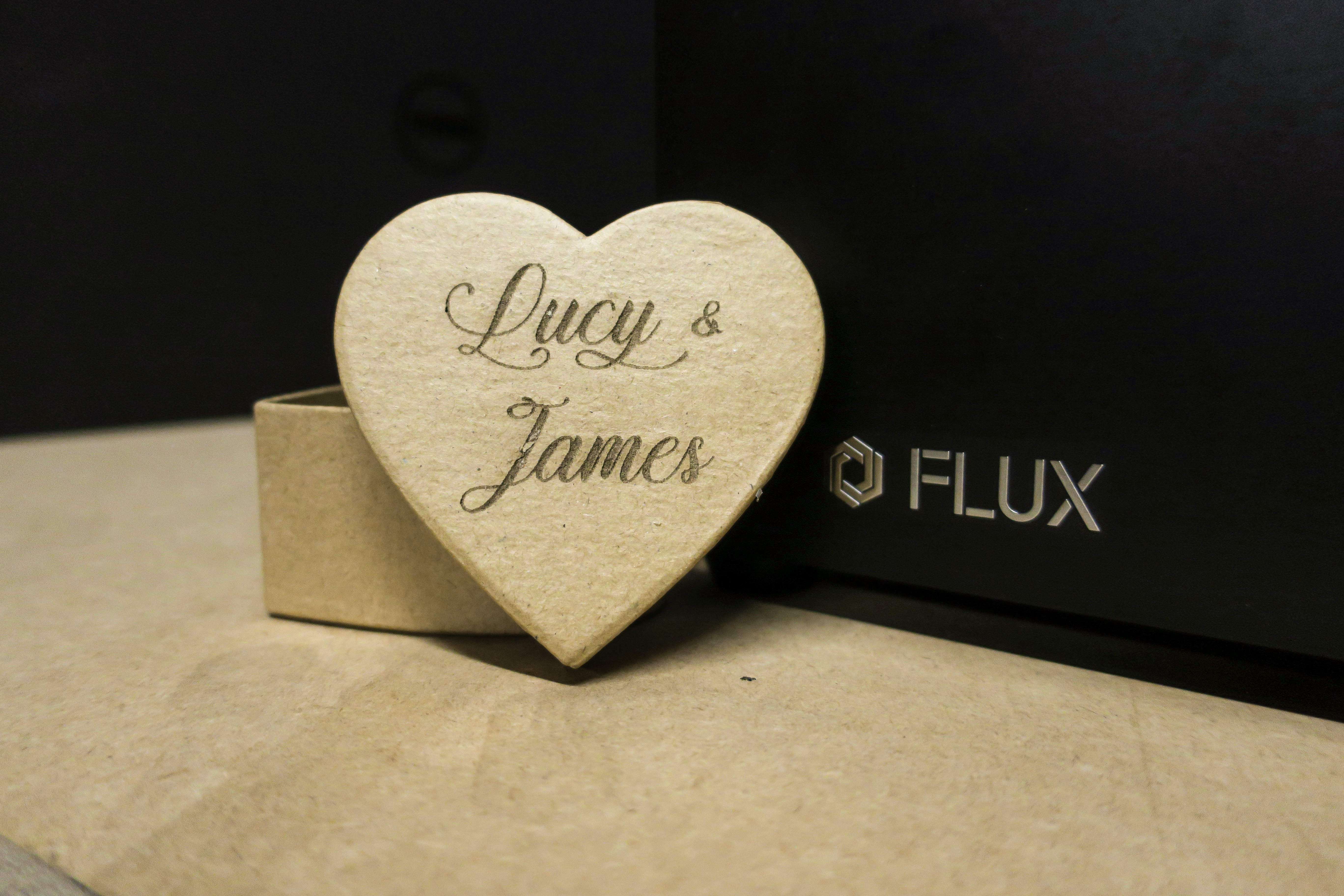 We recently received a Flux Beamo lasercutter. We paid for the machine, but Flux kindly paid for shipping and gifted us Rotary Tool (tho that hasn't arrived at the time of writing). Here are a few initial impressions of the device. It's worth noting that this is based on the machine we received and the current available features (some 'smart features' are not ready yet).

The company is touting this as the worlds smallest Co2 Laser. We're not sure if it's the smallest, but it really is tiny. The work area is approx 30cm x 20cm and the unit itself isn't that much bigger. We have a more standard Co2 engraver (a classic black and red style one). The work area on that is 30cm x 40cm, but the overall footprint is at least twice the size of the Beamo (and then we have to have a separate container for the cooling water and external fan for the extraction). With the Beamo the extractor and cooling are housed inside the unit (all you have to do is run the supplied extraction hose out the back of the unit).

We had a small issue with the Beamo when it arrived (it was slightly damaged in shipping - more on that later), but aside from that it was all set up and ready to go. Starting it up was simple and connecting it to a computer was just a case of putting in the IP address of the Beamo (which was easy to find on the devices touchscreen display).

Features:
The software used to connect to the device is Beam Studio. It's a fairly basic piece of software that has some design capabilities (tho we've not used it for that) and also set's up the work before sending it to the Beamo. The most exciting feature for us is the camera on the Beamo. It allows for a preview of the work area to help make lining up artwork a breeze. This is a really exciting feature and one we have made the most use of so far.

Most of the work we produce are simple shapes, which aren't too difficult to line up on our other machine (tho it's still a bit of a faff), but having the preview allows us to position artwork quickly and be more flexible with how we lay things out. We've just done a load of awkward shaped items for a craft fair (gift tags and spoons) and it was a breeze on the Beamo. Something that is slightly disappointing about this feature is that it is not a live preview. The camera is mounted on the laser head itself so has to pass over the area you want to see (stitching together photos as it goes). That means the process is a little slow and clunky and if you do knock or move something on the work area, you have to run the camera pass again. A competitor has a fixed, wide angle camera and that seems like it might be a better solution. Still, it's a really neat feature and something our bigger machine lacks.

Another feature that we've not had access to before is the ability to change the power and speed settings of the job while it's running. This feature is all controlled from the touch screen on the Beamo itself and is easy and quick to do. This display also give an estimate of when the job will be complete. For us, a big downside is the lack of fine control over setting that we're used to from our current engraver and software (tho saying that Beam Studio is loads easier to use, especially for beginners).

Quick note on the touchscreen too - it's large, clear and responsive. At the moment the menu is uncluttered and everything seems to be in a logical place. One small downside of having a touchscreen (the only physical button on the Beamo is to power it on/off) is that you have to move through menus in order to access transport controls for the laser head. it's not such a huge issue as laying work out in the software is easy, but physical controls are something we like on our bigger machine.

In use:
Using the Beamo is easy. The jobs we've tried have all run seamlessly to completion. Engraving has been accurate and reasonably speedy. It has a max speed that is approx half our bigger machine, but we never run that to full speed as it compromises quality. We have so far run the Beamo at speeds approaching it's top speed and there hasn't been any significant hit in quality from what we've seen. It's also coped well with cutting 3mm acrylic and the setting used didn't get anywhere the maximum power to do it.

Build quality:
It's a very cheap laser engraver and I think that needs to be taken into account here. It is a solid machine - the frame is metal and weighty, but the outer panels are very thin and there is a bit of flex in the unit. When it arrived one of the rails had been knocked in transit and was misaligned. Flux (credit to them) have been really good and helpful. The fix was to manually shift the rail (by hand) and the ease at which this was done is a little concerning. The whole unit doesn't feel as robust and industrial as our bigger laser (but then that is more of an industrial laser and cost several times the price of the Beamo). The main reason we bring this up is that some people are saying the Beamo would be great for maker spaces and schools, but we're not sure it would withstand that kind of use/abuse! We may be wrong and it's really too early to say. We'll update when we've run it for several hundred hours and see how it's holding up!

Summary:
The Beamo seems like a capable machine in terms of speed and quality. The biggest limit (for us), however, is also one of it's best selling points - it's compact size. It's hard to stress how small the whole unit is. This bijou size does, however, mean you are going to be limited to what you can engrave and cut on it. We can't see this device challenging our current engraver in terms of mass production. We think it's going to fit into the Toasted family as more as a prototyping machine (due to how easy it is to set things up on it) and something where we can offer engraving more unusual shaped items. It will likely get most of it's use when we received the rotary tool (but can't comment until that bit is up and running).

If you're looking for a good (and cheap) beginner machine the Beamo could be a good fit. Also, if you're planning on doing smaller items or lower runs of production (light crafting, jewellery making etc), then it may be worth looking into further.

Don't forget to check out our Instagram to see more pictures of what we've made on the Beamo so far.

As of writing this is a Kickstarter project (I believe the third successful Kickstarter that Flux have completed) that finishes on Saturday November 30th.  If you're interested, go and check it out to grab one of the early bird reward packages.